We know that running speed is determined through multiplying cadence by step length. An understanding of step length in combination with cadence is fundamental to knowing how to run faster by paying attention to the metric which needs the most attention. 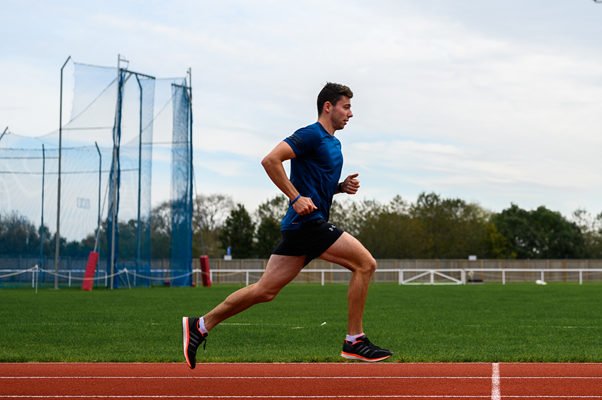 For an endurance runner, generating a “good” step length is a balancing act between producing a long enough step to help speed generation but not too long that it impairs the ability to have sufficient cadence and cause overstriding. Overstriding describes the horizontal distance between the landing foot and the hips at the time of foot contact. A runner's foot might land ‘too far’ in front of their hips due to either poor technique, fatigue or when step length increases in the absence of changes in speed and cadence.

NURRV Run calculates step length for each left and right step taken during every run and often condenses these figures down into an average value over a given running session, for example in Indoor and Outdoor Run sessions. Step length can also be monitored in real-time in the Pace Coach workout running mode as part of the aim to meet step length and cadence targets. Left and right step length measures are also used to determine the Step Length Balance value in Running Health to evaluate the percentage bias towards a higher step length on the left or right leg.

It is generally recommended to minimize the distance between the landing foot and the center of mass (as shown below) during initial ground contact as overstriding has been found to increase the risk of running-related injuries. To avoid it, runners should try to land each step (irrespective of their footstrike pattern) with the foot under a flexing knee. To generate good force against the ground runners should also think about driving the knees higher to promote air time and 'running tall' with a neutral pelvis.

Various approaches can help to generate a good step length, including strength training, developing your range of motion, and Technique Workouts. More information on these strategies is outlined in Technique Workouts/Improving Step Length to Run Faster.

Did this answer your question? Thanks for the feedback There was a problem submitting your feedback. Please try again later.
Last updated on April 2, 2020